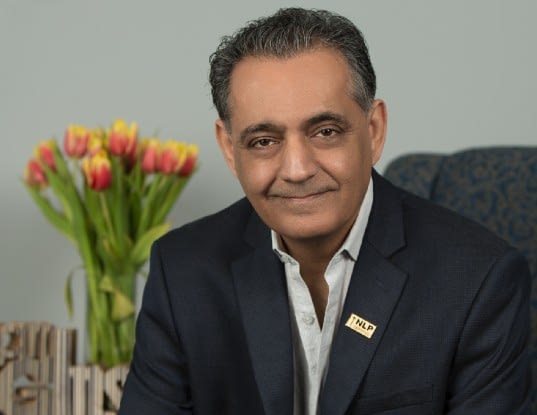 My name is Umar Hameed. I have been helping my clients get break throughs for over 20 years. My clients call me Mr. Breakthrough.

I am the founder of Mindset Boosters, a keynote speaker, an author, and Neuro-Linguistic Programming (NLP) performance coach.

This is what sets me apart from other consultants and trainers:

My combination of business savvy coupled with neuroscience gives me the unique ability to create quick and lasting change.  On this site, I share my latest creation Mindset Boosters. A neuroscience-based web-app that delivers immediate breakthroughs for leaders, salespeople and teams.

If you are ready to sell more and have a higher level of commitment, drive and passion you have found the mindset technology.

This is my story

My father was sent to England by the Pakistani Air Force to get advanced electronics training with the Royal Air Force. As soon as he arrived he fell in love with the West. He realized that anyone with a bright idea and the resolve to get ahead could build an amazing life. This was not possible in Pakistan.

When I was three, my family immigrated to England to begin our new life. We were not welcomed. The locals saw us and other immigrants as a threat. “You are stealing our jobs,” they said.

It turned out they were right, my dad got a job at Hewlett-Packard as an engineer and we had a good standard of living. However, I felt considerable racism and bigotry at school. My experience led me to become a more compassionate person. Looking back, I managed to walk through hell and then emerged in a better place.

Eleven years later, my dad decided that to build an even better life we should move to Canada, the home of maple syrup, back bacon and ice hockey. Eh!

The contrast between the UK and Canada was huge. In the UK, it took six months of savings to buy a color TV. In Canada, my dad could buy it with his first paycheck while still supporting his family.

I went to high school in Canada and received average grades in all subjects. My parents were so proud. And yet, I did not read a single book during my entire high-school experience.

By paying attention to conversations around me, I would get the gist of my required reading and could then get Cs on my exams. As soon as I graduated from high school, I became a voracious reader and discovered that I love to learn new things. I tried college but dropped out after a few months because the courses seemed boring.

Getting my first tech job

The computer field appealed to me, so I thought that it might be a good way to go. I applied for a tech-support job with Chevco Computing, though I knew next to nothing. Still, I made it to a second interview.

Lou Retta, the tech manager, wanted to assess my technical skills. He and two women (both vice presidents at Chevco) took me to lunch.

The women and I discussed love and relationships for 90 minutes. Lou never got a chance to talk tech. And somehow, I landed the job.

Chevco Computing was a distributor of computer products and my job was to solve tech issues for value-added resellers (VARs) throughout Canada. I had to acquire expertise for hundreds of tech products.

During the first six months, I read constantly about technology – morning, noon and night. And, as my level of technical proficiency expanded, I also realized I could never really get ahead working for someone else.

I decided to start my own business.

I became a value-added reseller, installing and supporting computer systems for small companies in Toronto. Fortunately, I loved what I did and my customers loved me.

My next step, five years later, was to go to the Mecca of computing – Silicon Valley in California. It was a natural progression, I felt, if I really was serious about developing my computer career.

I moved to the San Francisco Bay Area and started working for a value-added reseller in Berkeley, Calif. After associations with various local companies, I eventually opened a consulting firm called Gecko Sales & Marketing.

Gecko’s role was to be a virtual V.P. of Sales & Marketing for companies that wanted to launch their tech products in the U.S. market. We would do all the sales, marketing and P.R. road-trips for our clients. We worked with companies in the Valley, even companies based in Asia and Europe.

In 1996, I received an invitation to present a technology briefing at the White House. I helped them to imagine a future where the Internet and PDAs (no smartphones at that time) could be used to unify their messages to their constituents. So, when an issue came up, they could instantly send out a response the killed the issue dead in it’s tracks.

While working with companies around the world, I noticed two problems that seemed unsolvable. Problem one: No matter where a company was located, it often had employees who were good. Yet, those employees never became great. The companies consistently invested in coaching, training and incentives to no avail.

Problem two: Too many companies had weak management teams. The sum of the parts was greater than the whole because team members would function in self-imposed silos, displaying selfish ego-driven behavior.

Both issues were human problems, not business ones.

No Limits Selling is born

I realized the “good, not great” problem for people and teams was not being addressed by anyone in a satisfactory manner. Business advisors would provide consulting, training and coaching.

However, there is at least a 70- percent rate of failure in such “change” programs, according to the University of Pennsylvania Wharton School of Business.

Our friends in the psychiatric community are crazy and take far too long to create change.

I started the company, No Limits, to bring the latest insights from the world of Neuroscience into the business world. My concept was to take these insights and turn them into tools and techniques that business people could embrace.

It has taken 15 years to get the language and the processes right so people from every walk of life would find these tools incredibly useful. Over the past 10 years, I have spoken to business audiences in 14 countries.

I have helped thousands of individuals to break through their mental blocks by using the tools and techniques I teach.

If you’re not an author, you’re a bum!

The essence of what I have researched and taught over the years is captured in my third book, “Unleash Your Crazy Sexy Brain!”

This book caters to the business/practical part of your brain. For the spiritual side, I created “Transcending Stress,” a guide for tapping into inner wisdom and peace.

No matter what I was doing in my professional life at any given time, my purpose has always been the same: Be the joyful educator who helps people become “awesomer!”

I am always learning new things in order to help people develop the insights they need for building the life they want. Some of my learning validates my way of thinking. At other times, what I glean will destroy an existing perception of mine and lead me to something significantly better.

My constant goals are to enrich my understanding of the best ways to modify human behavior and how to improve and re-energize team dynamics. This website is where I share my latest insights and ideas.

Many years from now – when I’m 98 – don’t be surprised to see me on stage somewhere at a business conference sharing my newest ideas to make the world a better place.

And if not the world, at a minimum, my goal will be to make your world a better place so you can become “awesomer.” (That’s not an actual word, but it should be.)

I am a sales consultant and the world’s best expert in changing salesperson behavior. I can change any behavior that holds you back from reaching your sales potential.

I use Applied Neuroscience to change human behavior quickly, consistently and permanently. This is what sets me apart from any other sales trainer or sales consultant.